The ADL and “No Place For Hate” 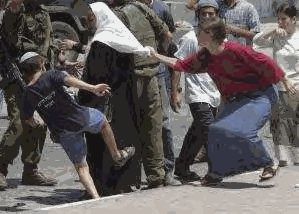 Among those reacting to Trump’s selective Muslim ban while it was in effect in the US was “No Place For Hate,” a brand created by the Anti-Defamation League and retailed by synagogues and other Jewish organizations across the country. The ADL explicitly supports advocacy and activism for Israel. “No Place For Hate” operates under their banner.

On February 3, 2017 the steering committee of “No Place for Hate” in Falmouth, Massachusetts wrote a letter to the editor stating that the Trump administration’s “misguided policies foster an environment of fear toward others and encourage expression of bias.” The letter continues: “we are especially concerned about the religious bias implicit in this ban that may only serve to increase anti-Muslim sentiments, as well as prejudice against other religious minorities.”

Though the rabbi and others who signed this letter may have been sincere, it is hard to avoid the hypocrisy of any group which advocates for Israel saying it is “concerned” about bias against Muslims. Israel was built on bias against Muslims. It is practiced day in and day out there, with attacks on the al-Aqsa Mosque, home demolitions, stealing of Palestinian land, military attacks on Gaza, daily executions of Palestinians in the streets of the West Bank, and an entire program of genocide since 1948.  Further, Israel has exported bias against Muslims to the rest of the world, especially the west, so that it can justify its colonial project in Palestine and get the US and Europe to destroy nearby Muslim-majority lands for the sake of its other project — Eretz Israel.

The starting point of this campaign was blaming Arabs and Muslims for the false flag attacks of September 11, 2001. Israeli agents from the Bush-era neoconservatives to the Mossad were central in the planning of September 11. If any Arabs or Muslims were involved, they were involved as patsies. A large number of false flag attacks have been blamed on Muslims in the years since, in much the same way,  to keep the momentum going. No place for hate? Israel wrote the book!

Making this possible is an amazing feat of propaganda. While Israel organizes the attacks on Muslims in Asia and Africa, it tells the ADL to lead the defense of Muslims in the US. The criminal pretends to the role of his victim’s advocate. He steals with one hand while offering to help with the other. He bombs Gaza while leading a worldwide struggle for human rights. He profits from the African slave trade and then takes up the cause of African American civil rights. He leads the neoconservative warmongers, and at the same time leads the antiwar left. He creates the wars and also the opposition to those wars. He spies on the US, and he claims the US as his closest ally.

Israel has lasted so long on the world stage because it is an expert at deceit. It is so good at deceit that it can commit monstrous crimes in broad daylight and have the world believe Israel was the victim. The zionist pre-empts criticism of Israel by convincing the world that such criticism is a hate crime, and gets laws passed to prevent it. On its website the ADL boasts that “45 states and the District of Columbia have enacted hate crimes laws based on (or similar to) ADL’s model.”

Perhaps this is the motive behind “No Place For Hate”: the real haters must appear to be the leading opponents of hate. If an organization gets itself into the position of defining what hate is and who is doing it, it is in a good position to make sure that the power it represents — racist Israel — is never accused. Has the ADL ever called out Israel for genocide in Palestine? Of course not. What about administrative detention? What about home demolitions? No. The ADL was created so that it could facilitate Israel’s genocide against Palestinians, and make sure the perpetrators never get blamed.

In 2010 a film group called Cinema Politica lost its venue in the Old Firehouse of Woods Hole in Falmouth, Massachusetts for showing Occupation 101, a 2006 movie about what life is like for ordinary Palestinians living under Israeli occupation. Cinema Politica had previously been warned by the Woods Hole Community Association not to show movies about Palestine, but because this was an abridgement of freedom of speech, and because a murderous Israeli attack on the Turkish aid ship, the Mavi Marmara, had just taken place, Cinema Politica chose to show Occupation 101. There followed complaints against Cinema Politica that the movie was "hate speech." The complaints were anonymous, but Jewish supporters of Israel in Woods Hole led the opposition. As a result of the complaints, the Board of Directors overseeing the venue -- the Woods Hole Firehouse -- decided to refuse Cinema Politica any further use of the space. Free speech was thus denied on the basis of complaints from un-named individuals who had influence behind the scenes with, or were members of,  the Board of Directors. At no time was there any open discussion on the merits of the case --  namely, why Occupation 101 was "hate speech." Freedom of speech on the subject of Palestine was cut off by supporters of Israel who didn't want the movie shown because of their own political beliefs. The same scenario has played out all over the country. Free speech is shut down on the basis of a construct promoted by organizations like the ADL, which is there for no other reason than to protect Israel. The ADL franchise, “No Place For Hate”, is used as a weapon against free speech, while claiming to be for equality and fairness.

The purpose of Jewish activism for human rights is not, as the Falmouth "No Place for Hate" letter says, protecting “other religious minorities.” It is really about protecting the Jewish minority. Many Jews have been outspoken on the cause of Palestine because they know a crime has been committed in their name, and they know that retribution may come. Those who are not witting participants have a guilty conscience. Some may wish to deny, some may wish to bargain, some may wish to obstruct, some may wish to shift the blame, but they all act out of guilt. It is up to those who have suffered in the many wars for Israel to decide what justice should be rendered — most notably, the Palestinians, but also the people of Iraq, Afghanistan, Syria, Libya, Lebanon, Sudan, Yemen, and Iran. It is certain, however, that the ones who have set themselves up as the arbiters of human rights and permitted speech — the ADL among them — are the ones who should actually be on trial.