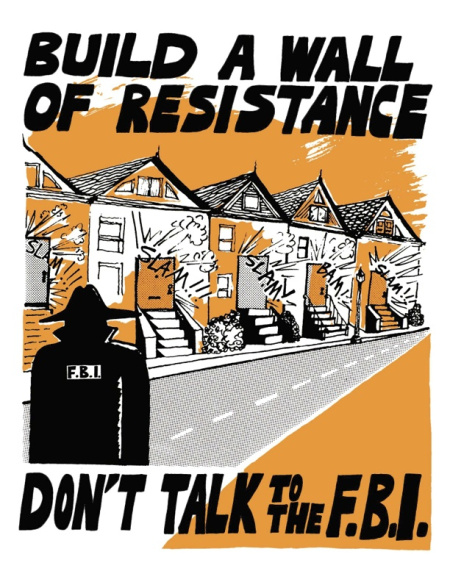 
The Federal Bureau of Investigation is the political police force of the United States government. It has been attacking individuals and organizations considered a threat to dominant power structures in the US since World War II. In the 1950s it began operations against the then Cold War enemy — Communists. In the 1960s it conducted what it called the COINTELPRO or “counterintelligence program” to infiltrate and subvert many other supposed threats: the Black Panther Party, the American Indian Movement, the Civil Rights movement, the Puerto Rican independence movement, communist, socialist, and womens’ liberation organizations, draft resisters, and the anti Vietnam War movement. Today, the FBI has extended its business of repression to journalists, anarchists, environmental and animal rights organizations, international solidarity groups, and to the newly-designated enemy of the “war on terror” — Arabs and Muslims.

If you identify with any of these groups it is important to know how to protect yourself against the FBI and law enforcement. Though we still have recourse to some legal rights, our best protection is collective resistance to tactics of police repression. Not only should the activist know not to speak to an FBI agent, his or her neighbor, family, friends, and wider community should know as well. It should be part of our culture.

The FBI is not your friend.

The FBI, supposed enforcers of the law, are well known for engaging in illegal tactics. You may be surveilled without a court order. Your home may be broken into and searched without your being told. You may be entrapped in any number of ways, from being charged for making a false statement, to being an unwitting dupe in a conspiracy which the FBI has entirely created. You may be falsely charged and found guilty of those charges through FBI tampering with evidence and collusion with other police and prosecutors. You may be trapped saying something to an informant for which you can be charged. You may be charged for expressing ideas which it was your absolute right to express. And for all these things you may be imprisoned.

In 2008 Tarek Mehanna was arrested on trumped up charges for refusing to become an informant for the FBI. In 2011 he was sentenced in a Boston federal court to 17-1/2 years for “material support for terrorism,” a charge specifically designed to apply extraordinary punishments to Arabs and Muslims in the US.

The recent case of Rezwan Ferdaus in Massachusetts and the Newburg Four in New York are among many examples of the FBI creating plots out of whole cloth in order to make highly publicized arrests which are then used to create the fiction of “homegrown terrorism.”

If you are considered a real problem, the FBI will go beyond harassment, entrapment, and judicial punishment to harm you physically. For a few examples, the murders of Fred Hampton, Martin Luther King, Filiberto Ojeda Rios, and Imam Luqman Ameen Abdullah, the “reign of terror” on Pine Ridge Reservation in the 1970s, and the 1990 car bombing of Judi Bari in Oakland, have all been connected to the FBI.

If you are approached by an FBI agent:

— Do not let agents into your house unless they have a warrant. Do not agree to a search.
— You have the right to remain silent, and you should do so. This right is protected by the 5th Amendment. It is also a basic human right.
— FBI agents can lie yo you but you can’t lie to them. It’s a crime to make a false statement to an FBI agent. It is best to say nothing at all.
— Consult a lawyer familiar with the FBI’s reputation for political harassment.
— Don’t become isolated. Let your friends and community know that you have been targeted, and ask for their support.
— Resist the FBI by publicizing their tactics and political agenda. Reach out to and educate others in order to create a culture of resistance. 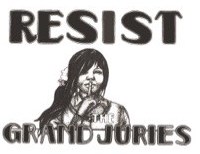 “The Justice Department and the FBI use the subpoena power of the federal grand jury, coupled with compulsory immunity, to jail radicals who refuse to cooperate with government investigations. The government detains these political activists through a system of judicial procedures and congressional statutes that the Supreme Court has upheld, but that nonetheless allow the executive branch to usurp the subpoena power of the grand jury and create a law enforcement inquisition power that requires full cooperation or indefinite imprisonment.” (From “Political Internment American Style,” Michael Deutsch, The Improper Use of the Federal Grand Jury: An Instrument for the Internment of Political Activists.)

Grand juries were inherited by the American colonies from the British judicial system. They have been used historically as a tool by kings, governments, and the powerful to persecute minorities and dissidents. When convened for investigation of movements for social change they are an instrument of state repression. People who have faced grand jury repression include slavery abolitionists, communists, labor leaders, antiwar activists, black nationalists, Puerto Rican Independentistas, environmental rights advocates, animal liberation activists, dissident journalists, and Arabs and Muslims in general in the US since the US declaration of the “war on terror” in 2001.

Grand juries violate US Constitutional rights. If you are summoned to testify before a grand jury, your 5th Amendment right to remain silent can be removed by giving you immunity from prosecution based on your own testimony (though the testimony of others concerning the same incident can still be used against you). Refusing to testify under these conditions can result in your being jailed for contempt of court for as long as the grand jury is in session, which can be as long as 18 months. The threat of a contempt charge is nothing more than legal coercion to make people talk against their will. The authorities often use this power to conduct “fishing expeditions”–getting information that otherwise would not be forthcoming about organizations they deem subversive.

Grand juries have been compared to trials by ordeal and the Inquisition of the Middle Ages. The interrogator has all the power, and guilt is presumed. You can incriminate others if you speak, and you can go to jail if you don’t. There is no due process, and no good outcome. You do not have the right to legal counsel in the jury chamber. Grand jury interrogations consist of you, the jury, and the prosecutor. There is no judge present. The proceedings are in the control of the prosecutor, and they are held in secret.

If you are an activist for social justice, or a friend of one, or a Muslim, or a minority, you should resist cooperation with a grand jury. No matter what you say, if you say anything, it can be used against the person or organization being targeted by the prosecutor. If you end up incriminating others in order to avoid contempt, you will have to live with that betrayal the rest of your life. Jail is by far the better choice.

In 1936 Juan Antonio Corretjer refused to hand over records of the Puerto Rican Nationalist party. He was sentenced to ten years in prison for “seditious conspiracy” to overthrow the US government in Puerto Rico. His stance established a trend of non-collaboration among Independentistas that, to this day, has obstructed the US’s efforts to destroy the Independence movement by turning its members into each others’ betrayers.
In 2010, FBI raids and grand jury subpoenas targeted 23 antiwar, Palestinian, Colombia, and other international solidarity activists in Chicago and Minneapolis. All 23 refused to cooperate with the grand jury.
In July 2012 the FBI conducted a series of coordinated raids in an attack on anarchists in Portland, Olympia, and Seattle. Those subpoenaed to the federal grand jury have refused to testify, even facing prison, with wide support locally and across the country.