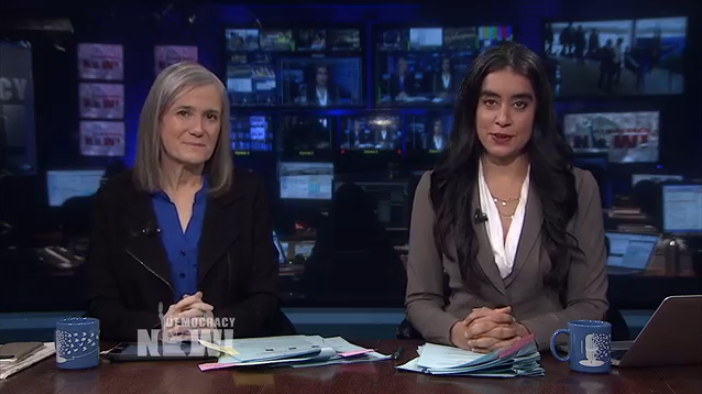 When it comes to Syria, the supposedly “alternative” media outlet, “Democracy Now!” promotes a line no different from the US State Department. In its September 29, 2016 broadcast, Democracy Now co-host Narmine Shaikh describes a “devastating bombing campaign by the Syrian government and Russia in the city of Aleppo” three days earlier, saying that “the two largest hospitals in Aleppo were forced to close after being hit by airstrikes.”

The broadcast implies that, for no reason, public hospitals in Aleppo were intentionally bombed by Syria and Russia. There is no explanation of why they would do this. No proof is given that the hospitals were operational, whether they were in fact bombed, who bombed them, or who controlled them. Instead, in the background, we see videos of blasted buildings and innocent people, including a small child, apparently being rescued from the rubble of collapsed buildings. The video implies that this was done by the Syrian government and Russia, but the time and place of the footage is not provided. The footage of the rescue of the small child carries the logo of the western propaganda NGO, the White Helmets, and has no credibility. Amy Goodman describes this group as “Syria civil defense forces” but Vanessa Beeley has reported that Syria has a real civil defense organization, which the White Helmets are not a part of; the White Helmets are USAID-funded impostors making propaganda videos to demonize Russia and Assad. Beeley also reports:

“Western media infers that those being targeted are civilians, not members of the Nusra Front and other foreign-funded terrorist brigades, and that all these “civilians” are being mercilessly bombed by Russian and Syrian air strikes.

All three main hospitals are fully occupied by the various armed insurgencies led by the Nusra Front, according to Dr. Hayak [a doctor in non-occupied Aleppo], who said they use the top floors as sniper towers.”

Without comment, Democracy Now plays a clip in which President Obama says, “the key in Syria now is that, unless we can get the parties involved to realize they are just burning their country to the ground . . . there’s going to be a limit to what we can do.” Obama promotes the idea that Syria is in the midst of a terrible civil war and that the most the US can do there is “to mitigate the pain and suffering those folks are undergoing.” How generous of the US! Why doesn’t it just end its massive support for the killers that are attacking and occupying Syria? The question would not be raised by Democracy Now.

By showing dramatic footage of bombed buildings and injured civilians and blaming it on the Syrian government and Russia, Democracy Now is providing everything the US needs to finally claim that it must carry out another “humanitarian war,” this time against Syria. A key promoter of this Orwellian concept is Samantha Power, who, as US ambassador to the UN, barely conceals the contempt she and her fellow neocons have for the rest of the world. In an insulting an officious tone, this instigator of war called Russia “barbaric” for its alleged bombing of Aleppo. Democracy Now airs a clip showing Ban Ki Moon saying the same thing. Though he does not name Russia or Syria, we are led to believe that Russia and the Syrian government were the perpetrators of killing worse than what takes place in “a slaughterhouse.” Of course, when the US kills people, it is always done humanely. Humanitarian killing has been Samantha Power’s specialty since the war on Yugoslavia, where the US and NATO dropped humanitarian bombs on Serbia for 79 straight days.

Two guests appear on the September 29 program, both introduced as grassroots Syrian human rights activists. The first, Osama Nasser, seems to be stumbling over a script he was given to read while Amy Goodman struggles not to look annoyed. Nasser says that Aleppo is being attacked by Russia and Syrian regime forces and that the US is doing nothing to help, as if the US were not already there in any other capacity. For instance, he does not mention the ongoing occupation of Aleppo by US forces cloned from al-Qaeda, and the Democracy Now hosts do nothing to raise this obvious point. Al-Qaeda foreign mercenaries are supposed to be the arch-enemy of the US, so mentioning them would only confuse people. Thanks to other news sources, we know that the Syrian army and Russia are fighting to force al-Qaeda out of Aleppo.

When Osama Nasser gets through his talking points, on comes the more polished Yasser Munif, speaking from Emerson College in Boston. Munif pushes an idea designed to appeal to western leftists, that since 2011 Syria has been experiencing a domestic grassroots revolution, the main enemy of which is President Assad, who came down on the revolution with brutal repression. Munif does not mention that the 2011 protests were likely orchestrated by the Israel and the West in the first place to destabilize Syria. But one would think, if they didn’t get this in 2011, that when they saw their cause being taken over by thousands of mercenaries from other countries, these grassroots revolutionaries would perhaps take a break from the “revolution” to get rid of the invaders. But Munif and other proponents of the so-called grassroots movement insist that all along there has been only one problem – the Syrian government. The US State Department and the Syrian Revolution are, conveniently, in full agreement: Bashar al-Assad is the root of all evil. “Assad must go” is at the top of the list of propaganda points.

In his commentary, Munif says that the Syrian government has used the media “to create a parallel reality” – a phrase taken from whoever creates buzzwords for John Kerry, who said in the same week that Russian-Syrian assertions of the US responsibility for sabotaging a ceasefire made him feel like he was living in “a parallel world.” The world that most other people live in could see that the US was clearly guilty of sabotage.

The propaganda we are seeing in the world today relies on a full 180º overturning of reality. The horrendous crimes being committed by the US, Israel, Turkey, Saudi Arabia, and others in Syria, as they are carried out, are immediately blamed on the victim of those crimes – the people of Syria — and on Russia, the one nation which has stood up in Syria’s defense. Democracy Now is doing its part in this subterfuge by making sure that liberals and leftists who follow the show are properly misled. It does this by devoting alot of its program space to good causes, like exposing the epidemic (surely a policy by now) of police murders of blacks on US streets. Indeed, most of the September 29 program was devoted to the then latest murder of Ugandan refugee, Alfred Olango.

But Democracy Now is no different than any of the mainstream media news programs – it omits any analysis of Israel’s role in instigating a war against Arab and Muslim nations, it omits any critique of the power of the Israel lobby, it omits any examination of the neocons and their agenda for Israel, and it omits any coverage of the fact that the September 11, 2001 attacks were planned and carried out by the neocons and others in order to begin the succession of wars that followed. This is by no means a complete list of the services rendered by Democracy Now. The program would not be on the air, getting generous funding and wide exposure, if it were not doing some heavy lifting. The self-righteousness coming off the screen of this supposedly radical left news program makes it even more offensive than Fox News.

For more on the neocon agenda, see Laurent Guyénot, Who Are the Neoconservatives? at Voltairenet.